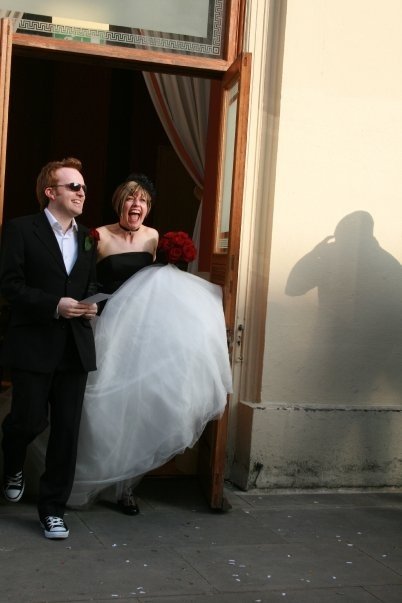 And what a amazing day it was! We had Dom (from Plug-in) playing the ukulele for us during the ceremony, and were greeted by a 70 piece choir (thanks Hullaballoo!) as we left the town hall! And later, our guests were “treated” to a song from Jenny and I along with a tap dance routine (and yes I’m sure it’ll appear on youtube before too long…)

And what’s all this got to do with the world of Flash and Papervision3D? Well, nothing. Although I’m just flying out to Thailand for a couple of weeks so I expect I won’t be returning emails for a while. But I promise it’ll be business as usual when I get back, so I’ll catch up with you then!

congratz Seb! Have a nice trip 😉

congratulations to the both of you, careful in bangkok now! DON’T GO VISITING ANY OF THE LOCALS ‘RELATIVES’. 😉

sorry ellen and i couldn’t take up your invite on the day, we had friends from london down to entertain. er, maybe next time? 😉

Sweet. Please say you didn’t have the shades on during the vows.

wow! Congratulations! you both look so happy and stylish.
/ps this picture could make a beautiful advert for Converse 😀

Congrats! Have fun in Thailand and try to keep your mind off of anything related to Flash while you’re there.

Dude, welcome to the club. Also, @zenbullets wearing shades while doing vows isn’t a big deal. In marriage you need to have a good poker face. 😉

Congratulations, Seb. Have a great honeymoon and a safe trip 🙂

Congrats Seb! That photo is fantastic!

Congratulations to both of you!

Have a wonderful honeymoon trip!

Oh my god, Seb just did the definitive “commit”!

Congratulations Seb! Have a nice stay in Thailand.

Congratulation to both of you! enjoy your honeymoon in Thailand.

Congratulations Seb! Have an amazing time in Thailand, all the best!

Congratulations Seb! If I could send you some papervision 3d confetti particles, I’d try. 😀

Congrats Seb,
I hope you really enjoy your new status!

Congratulations Seb, have an amazing time on your honeymoon.

Thanks everyone! Now I’m back and trying to figure out how these computer things work again… not to mention clearing out a HUGE email backlog!

Congratulations, my wife and I are about to have our fist kid. Just watch, time flies by once your married. Enjoy it!

Hi Seb, I have been reeding your blog since a while already, and i can´t imagine a better occasion for my first Post.

Just wanted to Congratulate you, and your newly wife!
wish you all the best.

I am now married to moonlander (hooked)