Note: this post is many years old but I’ve left it here for historic reasons – it’s the first time I made an interactive fireworks project which eventually led to the development of PixelPyros and Electric Laser Flares

It seems like I’ve been promising to write this one up ever since November! And now I can finally reveal the official video of the event! Which gives me the perfect excuse to get around to this blog post. 🙂

Pyro(technics) to the People was an massive interactive digital fireworks display that was here in Brighton last November 5th. (Which is Guy Fawkes Night for readers outside the UK). It was squeezed kicking and screaming into the world by my team at Plug-in Media, and it was made entirely in Flash.

Ever since seeing the awesome work with Graffiti Research Labs‘ (GRL) Laser Tag project, I’ve become utterly obsessed with the idea of projecting various things onto the sides of buildings.

And as you may have noticed, I like Flash particles. 🙂 And over the last couple of years I’ve been toying with the idea of an interactive fireworks display. And I walked past the Brighton Unitarian Church pretty much every day. And I just found myself staring at it…

So when Tara Solesbury (then of Wired Sussex) asked us if we had any ideas for the Brighton Digital Festival, it was the perfect time to tell her of my plans! Tara, being the one-woman tour-de-force that she is, set about making it happen; coming up with the catchy title, writing a super convincing art blurb that made me sound like an actual artist, and putting all the various and many different pieces in place for it to actually happen.

Thanks to the massive speed increases in Actionscript 3 it’s now possible to use Flash for this kind of ambitious project, where previously we would have had to use Processing or native code. But still, there was only about 2 weeks to go and a lot of unanswered questions…

Before we could do anything else, we had to make a nice firework effect. Using the Plug-in Media particle system, we created this :

In order to achieve the kind of numbers of particles we needed, we used only bitmap objects, drawn onto a big bitmap, which is much faster that moving around a whole load of sprites.

Once we got that working, of course we just didn’t know what stuff would look like when it was projected onto this rather strangely shaped building! And we obviously couldn’t just hoik our stuff down to the church and have a go! So the Plug-in Media team built a scale model. We were so busy my gorgeous fianceé Jenny even helped out :

And thankfully, when we projected fireworks onto it, it looked kinda cool.

The motion detection and sensors were all done with a single video camera, plugged into the computer and picked up by Flash as a Camera object. We’d just take the current frame, invert it and overlay it over the last frame. Anything that was different between the frames would show up. Then we’d apply a threshold and use that to detect the changed pixels.

Here’s an example of how it works :
Flash content available here
Drag the red detection area around to see the effect. And you’ll need a web-cam otherwise it won’t have a video feed to test!

Naturally the main fireworks Flash object (swf) took up the entire screen for the projector, and I needed to calibrate and control this from my laptop screen. So I had to make a secondary controller swf that communicated with the fireworks swf. It was a bit of a nightmare to program with the horrible LocalConnection object, but we managed to get it working in the end. 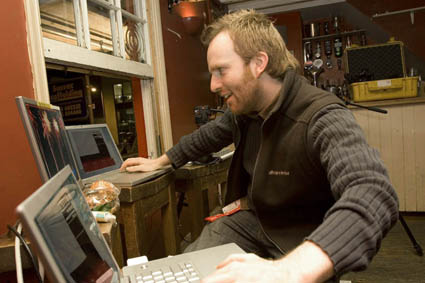 The calibration tool allowed us to move the collision areas, adjust their sensitivity, and as a nice last minute touch, we could type messages that were then projected to the audience during the show.

Having seen how GRL did it, we thought we knew all about projectors. How hard can it be? Just get a big arse projector and point it at the building, right? Well it’s a little more complicated than that. Wide lenses, zoom lenses, throw ratios, contrast ratios, power requirements, and of course the all important lumens brightness rating.

Thankfully, Tara had enlisted Mark Scarratt and brightonart.tv, who have considerable experience in this type of large digital event. GRL were using a 5000 lumens Panasonic projector. But that wasn’t going to be enough for us!

We asked XL Video about hiring one of their Barco projectors – an awesome 20,000 lumens! But rather frustratingly they were all booked out. (We later found out that Haque Research and Design were hogging 4 of them for their astonishing and beautiful Evoke installation at York Minster)

After discounting the Christie Roadie 25K lumens projector (it needs 3 phase power) Mark and his team hunted down a brand new Sanyo XF47 – the first in the UK and with a contrast ratio of 2000:1. You can’t really tell from the picture, but it’s HUGE! Just under a metre long in its cradle.

And of course what would fireworks be without the pops bangs and fizzes that usually occur? So we set up a mixer, and a couple of radio sets that transmitted the sound effects from the computer, across the road to a 16K sound system provided by Andy Mead and his company Firefly Solar.

We’re already planning bigger and better things for version 2 that I can’t really talk about. But keep an eye on the blog and I’ll let you know. 🙂

Nice work dude. Great to see flash and not some other language used!

Talk about getting the best bang for your buck 😉 That had to have been the best launch party in the history of launch parties. Amazing work, Seb!

I think the expression on the face of the child at 01:23 is all that matters.
Truly amazing project.

What a shame I can´t take part “fotb” this year, but drinking a beer at “the mash tun” watching your fireworks cracking by was a pretty delicious experience. 😉

@George yes great now that AS3 is powerful enough to handle this, it’s really giving processing a run for its money! Still have a strange limitation on processing live sound though… maybe FlashPlayer 10 will fix that?

@Savvas Malamas yeah he’s a cute kid, have no idea where he got the ear defenders from! But it’s a testament to the fact that these fireworks were LOUD!

@frank reitberger well let’s see what happens, I’m looking at taking this on the road… do you have a suitable big flat building where you live? And a lot of money? Give me a call 🙂

It looks great! I’ve done lots of stuff (special effects, fireworks etc.)
for theaters using real pyrotechnics with a sequencer tp back up the real sound in case it didn’t go off and an electronic firing box. But all this is not allowed in German and several mainland European theaters any more because of the fire risk, so this looks like a breakthrough. Please keep me posted, and if you need a genuine banger or two from my old stock I’ll ship in over by submarine.
Cheers,
Mike

@mike in hamburg – yes! This could really work in theatres! (I actually used to work in a theatre so I kinda know the environment 🙂 ) Feel free to drop us a line if you want to talk about this more… sebleedelisle at gmail dot com.

I’ll get back to you when I have a new project. The sound and synchronization with the fireworks is of course a problem. If you let off a 125 dB stage cannon in a theater the people hear the bang differently because of the force of the explosion, and sometimes they even smell the smoke. Even large PA systems can’t reproduce the sound, and in an open-air environment (which I’ve never done) it’s probably even less convincing.
I’ll think about it, though.
Mike

none of the companies I worked for would go for something like that 🙁 given those costs, I mean, how many people in the street could be considered “advertisement target audience”? so from our managers POV this would be “money wasted” no matter how cool it looks like. so, my point is you are working at great place.

…then again, this morning I have seen projector+motion detection in action at local supermarket. Projector itself was pointed to the floor, and there were stones under water in a picture. The idea is, when you walk over the image, the water ripples under your feet.

@mike in hamburg yes it can be difficult to re-create exactly the sound of exploding gunpowder, not to mention the bright visual flash that these fireworks create. But of course this is all smoke and mirrors, and only a simulation. We can only do the best we can 🙂

@makc yes I think you’ll find quite a few business cases for this, not to mention the art installation world! We’re certainly getting a lot of enquiries for it!

I love your work, Seb! I just saw you at the Flash Belt conference and am now a huge fan. Your work is very inspiring. Thanks for making the world a happier, more magical place!

Hey Margie, thanks so much for your kind words, I’m touched. 🙂

looks great! gutted I missed it!

I love particles too. I am still very much a student of everything involved in making them. Check out the following link (please click away to fire your own fireworks show)

This is a fireworks type widget I did a year and one half ago. I made it over the course of 4 days trying to get some work while I was still in school. I based off of Pekka Sandborg, aka Mr. Hat’s work on GotoAndPlay.it.

At the time I understood it only enough to manipulate his fire particle demo to make a color display of fireworks with two different burst patterns, random life spans, velocities, and even a red, white, and blue color scheme for some of them.

On the 4th of July, it sort of goes off on its own. I really need to bring this into the world of as3.

Thanks for the inspiration. It’s neat to see work enjoyed by so many, especially at the same time!

[…] In July I flew to Cologne to teach two days of Papervision. While I was there I also visited Andre Michel and Joa Ebert at Hobnox. And later that month we were nominated for two FlashForward rubber arrows, for MLB and (my pet project) the digital interactive firework display, Pyrotechnics to the People. […]

[…] was my 25Line entry for the November/December contest. It was based off of the Fireworks demo Seb had posted a long while back. I got into the top ten with it but sadly didn’t win. In fact […]

[…] Interactive digital fireworks – Experiment in the streets of Brighton http://www.sebleedelisle.com/?p=178 […]

[…] mind when I stumbled across the video while doing research this week. You can find more information here; what really amazed me is that I’m pretty sure I could re-create the project using technology […]

one thing though, it looks like your kimli flash embed plugin is busted…

[…] and Jer Thorp.  Seb is from Brighton, UK and will be speaking on his work, including: the Pyro for the People installation and a cutting edge 3D web site for the BBC.  Jer, coming from Vancouver, BC, will […]

[…] An interactive artwork that features a firework particle system created in Flash. Pyro(technics) to the People was a massive interactive digital fireworks display that was here in Brighton last November 5th. (Which is Guy Fawkes Night for readers outside the UK). It was squeezed kicking and screaming into the world by my team at Plug-in Media, and it was made entirely in Flash. ~ Seb Lee-Delisle […]