2015 has gone by in a blur – at first I couldn’t remember the details of what I did. There have been so many different threads and distractions that it occasionally felt like I didn’t accomplish much. But now I’ve looked back at my calendar I’ve realised that there was actually a lot going on. In fact it’s taken until mid-way through January to compile it all together! 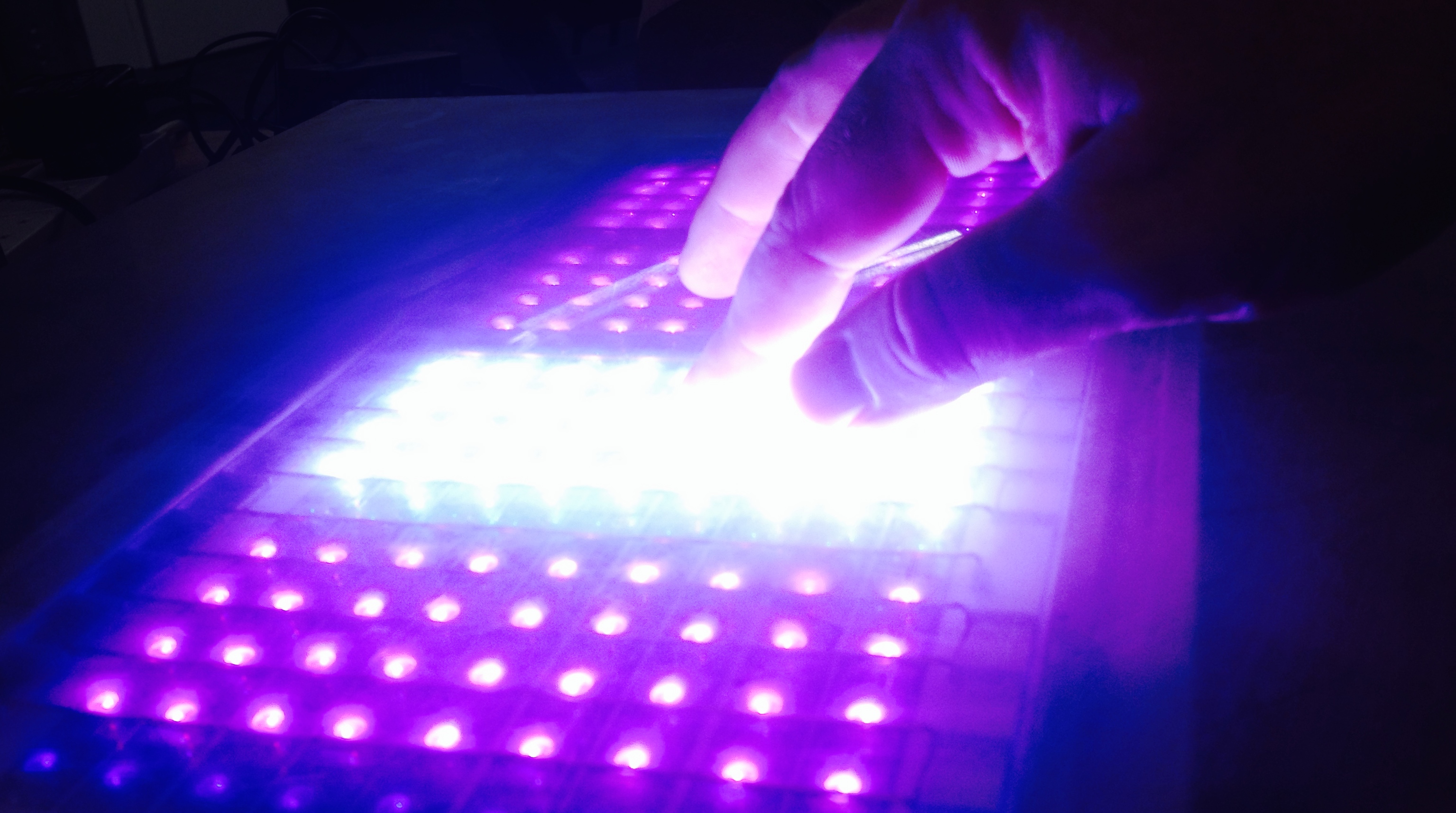 If 2014 was the year of the laser, I’d say that 2015 was the year of electronics. Following on from my LED emblazoned Light Synths I continued to develop my skills, working on a wide variety of different electronics projects and workshops.

The year was off to a flying start with my Internet of Things workshops, or ST4i, as I cheekily prefer to call it. Three sell out workshops in Brighton, followed by more in Amsterdam, London and Dusseldorf. It’s been really great to share the electronics stuff I’ve learned and connect little prototypes to the internet. I loved it, and thankfully the participants seemed to really enjoy it too.

In February, I wrote an in-depth article for net magazine all about ST4i, giving an overview of all the various platforms and devices. This stuff moves so fast that it may be a little out of date, but you can see it here – How to Build Cool Stuff for the Internet of Things.

And then in June, I was invited to speak about IoT on Radio4. It was a fun segment on “You and Yours” (from 18:50 onwards) and we all had a knowing laugh about the internet fridge again. Fun times!

I’ll be updating the ST4i workshops with a brand new version with a really exciting twist. Join the mailing list if you want to be the first to hear about the new workshops.

In February I spent a week with choreographer Tim Casson on a series of experiments involving live audience interaction with dancers. I have a very sedentary lifestyle, so it’s really wonderful to work with a group of talented dancers so good at expressing themselves with their physicality. Tim’s a really nice guy, and I’m sure we’ll be continuing this R&D into 2016. You can watch this little chat we had on youtube about our work together for South East Dance in August.

The “Get Enough” Robot Spoon by Dominic Wilcox

In June I worked with my artist-inventor friend Dominic Wilcox on a series of crazy breakfast related inventions for Kelloggs. I completed the electronic elements for 2 or 3 of his crazy ideas, including the Soggyometer and the “Get Enough” Robot Spoon (I’m particularly proud of the expressive eye animation).

Working with Dominic was a real pleasure and delight – I hope I get the chance to work with him again in the future.

In other electronics side projects I worked on a vending machine with multi-coloured LEDs for the hackspace, my office lighting, with adjustable daylight LEDs and a weather station reader.

One of the larger things I worked on was a highly controllable servo motor for a 3D printer extruder. Servo motors are complicated, and I really need to write a few posts to document that project. Suffice it to say that it took several weeks to fully understand and program brushless DC servos but in the end, I managed to get a prototype extruder working perfectly. 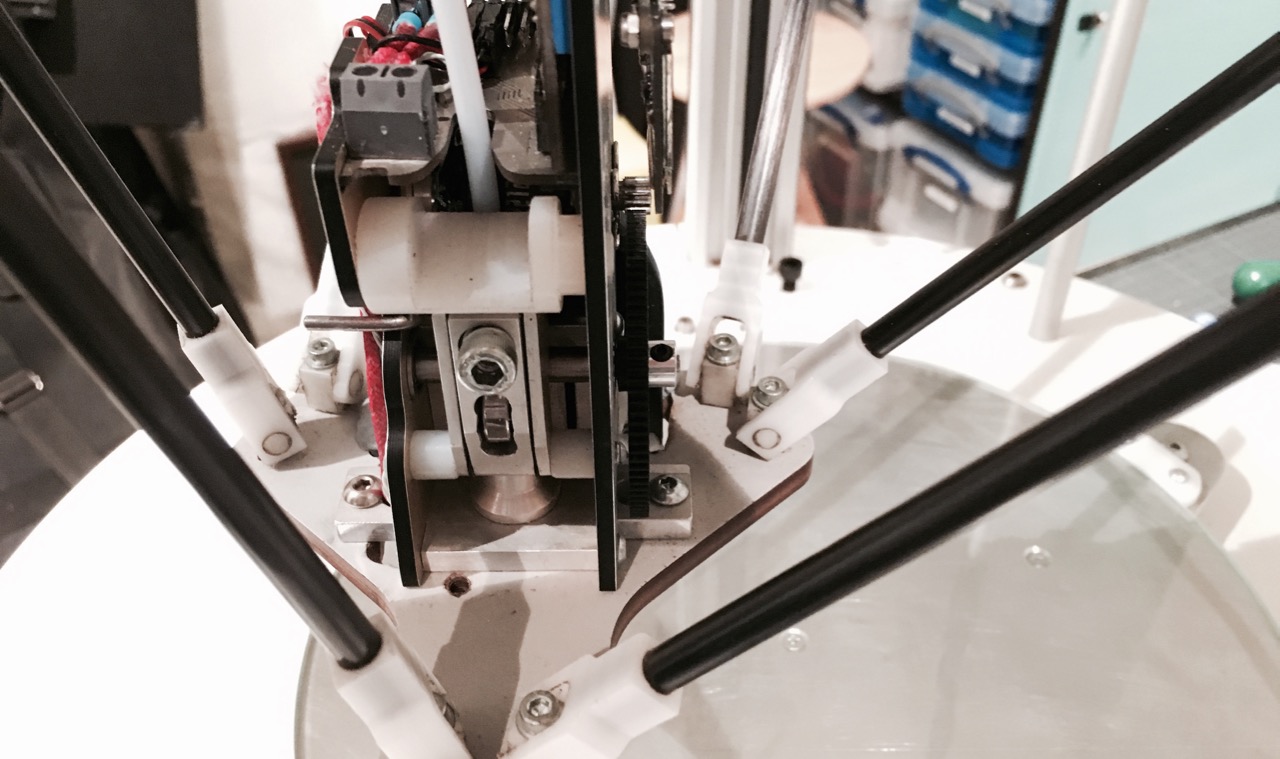 The servo powered extruder on the Delta One 3D printer prototype

The main benefit of using brushless DC servos on an extruder rather than the traditional stepper motor is weight. You can make a very lightweight direct drive extruder on the print head that is more powerful than a large stepper motor.

This has been for an ongoing project of Paul Strotten, the engineer I’ve worked with over the last 3 years. He’s been designing and building his 3D printer for a year or two now. The idea is to bring it to market but progress comes in fits and starts. But I think the servo drive hardware could be useful for people outside of that, so I really need to work that up into an open source hardware project this year.

Of course my obsession with lasers is continuing, with three more laser shows for Smashing Conference in Oxford, LA and New York, each progressively becoming more interactive. And again working with Val Head on the animations and laser help from Paul Hayes. The NY edition was on Broadway, and projected onto the Avenue Q set, and the LA show had anaglyphic red/blue 3D. 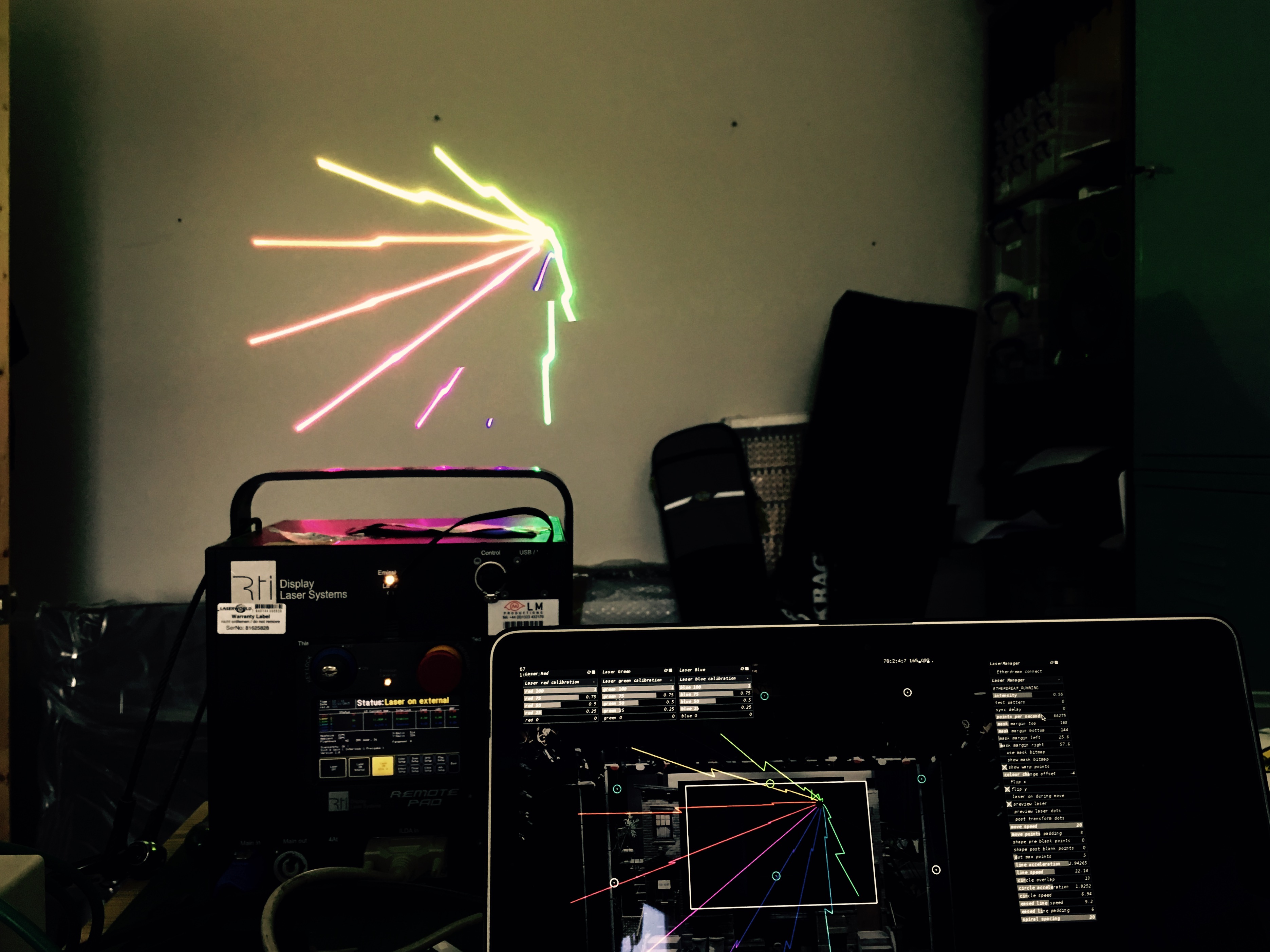 In the summer I started work on releasing my laser control code into a reusable library for openFrameworks – ofxLaser. It takes care of drawing laser shapes, optimising the path of the beam, calibrating the colour balance, amongst other things.

My friends Tangible Interaction in Vancouver used it for a wonderful participatory laser animation installation ANIMA.  I’ll be continuing to refine the addon throughout 2016.

Oh and I finally got qualified – my laser safety training certificate was issued in September.

I know it’s very un-British to talk about money, but financial extremes played such a big part of 2015 I can’t really ignore it.

The year started with an unexpected tax bill of £25k! The result of some very poor financial planning; I had made made some money which I then used up developing Laser Light Synths which fell in the next tax year – I was paying tax on profit that I no longer had.

I fired my accountant, managed to get the bill down to £15k and took out a loan to pay it off, but the monthly repayments were a huge burden. I’m very thankful that the ST4i workshops were such a great success, they pretty much single handedly helped me to keep my head above water in that time.

And then the second half of the year was pretty much the opposite. A couple of years ago when Jenny and I moved to a new flat, we managed to keep hold of the old one, which I rented to my brother. Since then, property prices went up considerably so it made sense to sell the flat.

It was a huge relief to be able to pay off all our debts and keep some money in the bank. And knowing I have a safety net in case of bad cashflow is a massive luxury. Of course I should really put that money in our current mortgage…

Although I greatly benefitted from the situation, it highlighted to me how unfair the financial system is in this country. If you have money you can make more money, pretty much out of thin air. I’m greatly concerned about the inequality of the distribution of wealth, although I’m not entirely sure what to do about it. But that’s a story for another time. 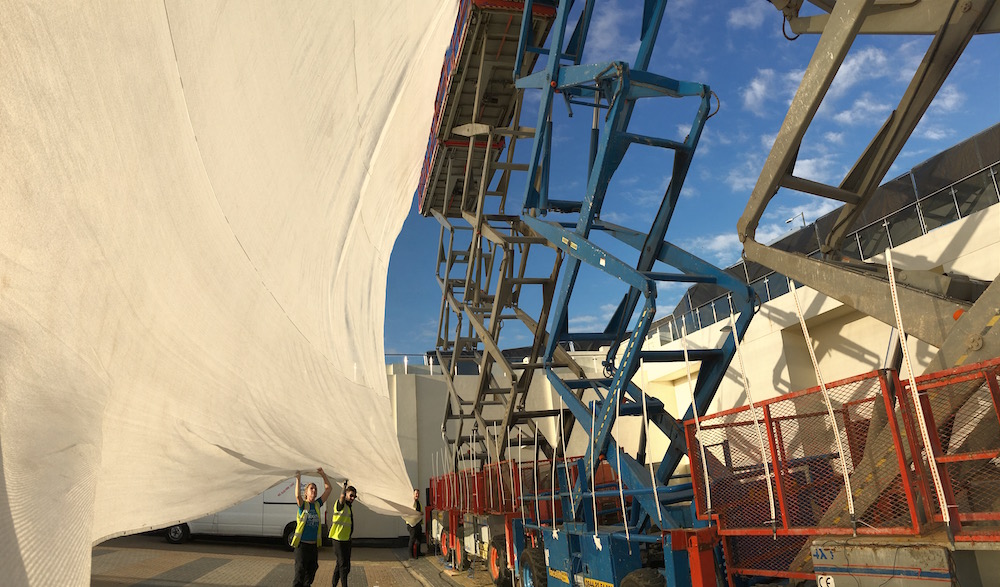 PixelPyros crew rigging the massive screen
After a break in 2014, PixelPyros had two outings in 2015, at Media City in Salford, and at the Arts By the Sea festival in Bournemouth. It was good to revisit the project, and we had a few more pixels to play with thanks to a pair of upgraded projectors. 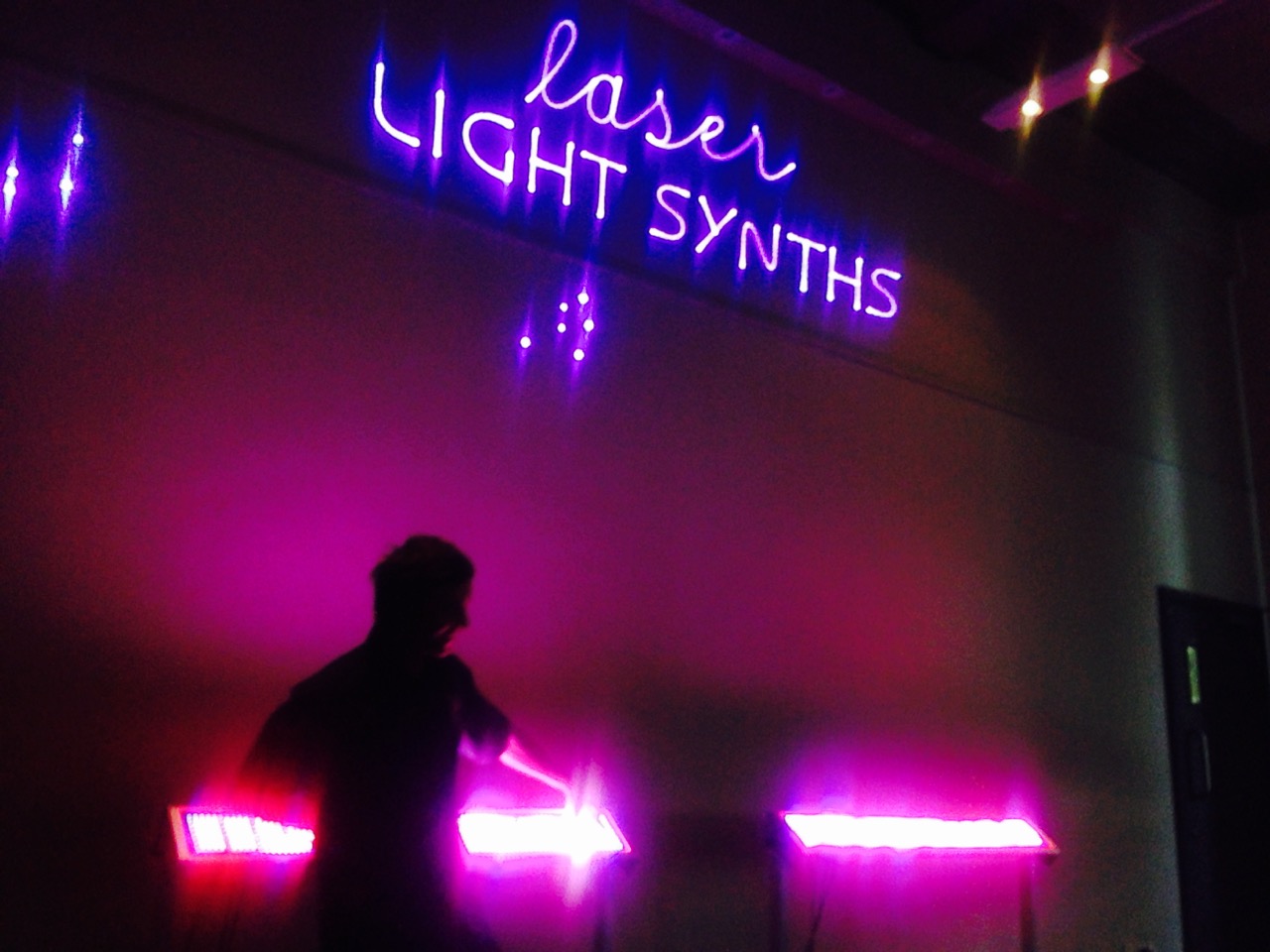 If you’re interested in booking either of these projects for your event in 2016, please get in touch. seb@leedelisle.com 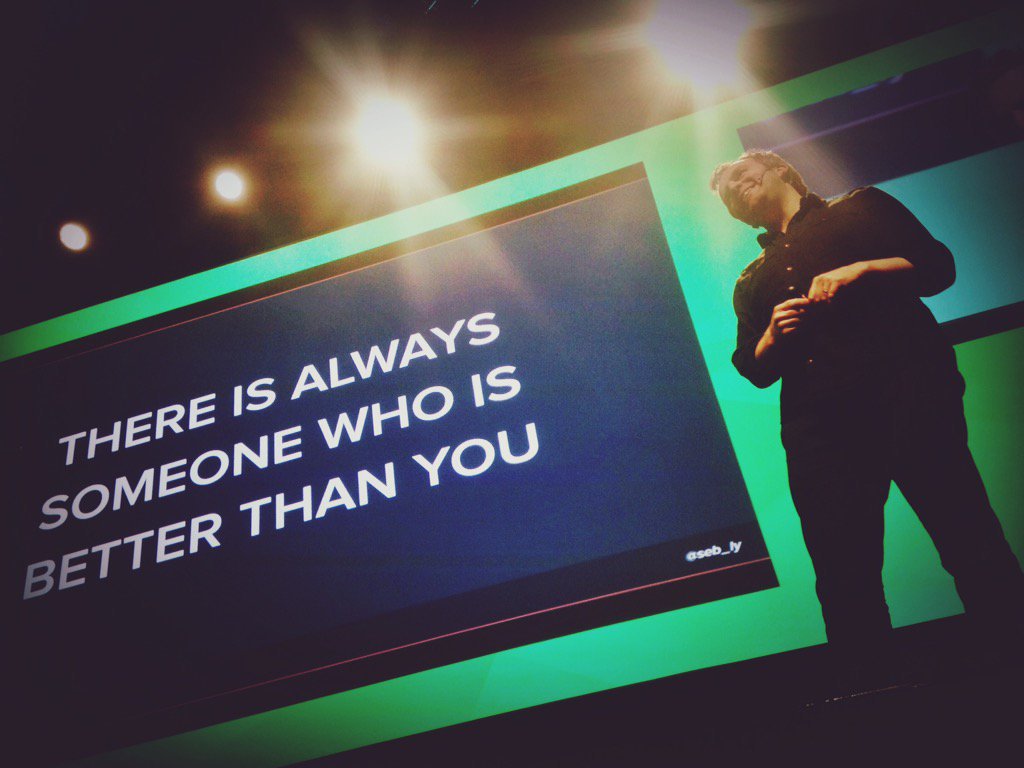 Motivational speaking at its finest

Not quite as many conferences as previous years, but still plenty to be getting on with. I travelled to York, Shropshire, Amsterdam, Trondheim in Norway, and there were a few in London, mostly opening or closing keynotes.

I ended the year with a CreativeJS workshop in Brighton, and inspired by Remy and Julie, I set up a diversity scholarship to encourage under-represented groups in our industry to attend. I was astonished to get applications from all around the world, and I wish I could have given every applicant a place. It was possibly the most diverse workshop that I’ve ever run and that made it a better experience for me, and hopefully everyone else.

Good question! I’m currently taking some time to prioritise all the various strands to my career. My priority is the new ST4i workshop and that’ll be up and running very shortly.

Other than that I have a lot of options. Laser Light Synths needs more work, so I could apply for a grant to take that on tour (like I did with PixelPyros in 2013). Both that and PixelPyros could do with a more co-ordinated marketing push.

And I’m embarrassed about how little I’ve blogged, and I really need to document my projects better. I’m working on a new website, and maybe that’ll give me the impetus I require. I really need to give back more, both in documentation and in my open source projects, and I hope to do better this year.

I feel like maybe my career is in a bit of a transition but between which states? Well either way, it’s a fun ride. I consider myself exceptionally lucky and privileged to have this lifestyle and the chance to pursue almost any interest I want. Here’s to 2016!

Nice wrap up of your 2015. For me always interesting to see what everybody else did, when I have not seen them too often. All the best for 2016, Seb.