I hate the Flash player settings panel. It drives me mental. I don’t understand the logic behind why you need to access a swf running on an external server to adjust the settings of a plugin that’s running on your computer?

And many are the times that I’ve been stuck without internet access trying desperately to allow a local swf to load files on my computer.

But today, I found that I couldn’t access the settings panel at all! It was just a blank square! 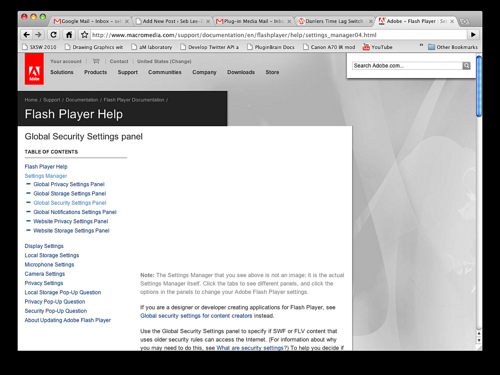 A closer look in the Activity window in Safari revealed that the security setting had expired for the server hosting the swf. Which believe it or not, is still macromedia.com!

I found a workaround though. I just directly linked to the swf at https://www.macromedia.com/support/flashplayer/sys/settingsmanager2.swf?defaultTab=g_security and then clicked continue when safari asked if I really wanted to access the swf. Although I don’t see anything at this point, if I then go back to the page with the settings panel on, it now loads.

And while I’m on it, here’s a quick tip. If you don’t want to manually add every single folder on your computer that has swfs you want to run locally, just add “/” as a safe location and you’ll never be troubled again (on OSX).

But in the meantime, I would love it if the settings for the FlashPlayer were not only accessible online. Anyone else agree?

UPDATE Thanks to Seb in the comments (not me!) for providing the solution for PC users :

On windows ive had to put in drive letters and UNC share names, e.g.
“C:”
“SERVER”

And I’ve also found an feature request for this on Jira so please vote for it!

Agreed.
Ran into exactly the same situation today and double clicked in the Activity panel of Safari 🙂

The settings panel does suck and definitely seems like an old and weird solution to configuring flashes settings… You can avoid it if you are just trying to allow local swfs to access files on your computer though. By using FlashPlayerTrust files:

Hi Kelvin, that just seems like a ridiculously convoluted method! But thanks for sharing.

I also came across this: http://www.nelsonthornes.com/technicalsupport/Guides/flash_player_trust_patch.htm
which is a PC solution to the problem and should be easily extrapolated for other systems with the info above.

As I mentioned in my reply to your initial Tweet, Adobe are long overdue with rewriting the way it handles it’s security policy files.

Yes I agree, sometimes I am just playing(I am still leaning) and I just save things to the desktop, and yes I would love just to open the swf or html generated(same issue) locally to test. I am lucky that I have a local ColdFusion server so I can put everything in my webhost, but why should I have to do this anyway! Maybe it is just me, but the only way I can see the swf locally it to test movie in flash, but it would be nice to just open the swf. I made it, I know what is in there, so enough with the security!!

Hi John, adding “/” into the trusted sites list should fix your problem (it works on a mac, can anyone confirm for Windows machines?)

It is an arcane system, and smacks of laziness on Adobe’s part that it’s not been tackled soon. Maybe now that the security setting has expired for the server it’s sitting on someone might think about looking at the system overall…

But then perhaps they won’t.

Wanna log a feature request for the Flash Player? I’ll stick my vote on it if you do.

Thanks for posting! This helped me fix the flash settings manager blank panel problem.

It’s ridiculous to say the least…

I can’t believe that in 2010 we’ll still be using something so outdated!!

I couldn’t agree more!! Man it is terrible. However, there is an alternative (which is my method of choice). You can see both methods outlined here:
http://natejc.com/blog/?p=54

On windows ive had to put in drive letters and UNC share names, e.g.

That did the trick 😀

I think this was implemented back in early Flash days in order to keep the size of the Flash plugin low. As back then very kb counted and if they could save an extra few kbs by keeping the settings web based, then it helped getting up Flash penetration numbers.

These days, an extra few kb to bake the settings into the player isn’t important, but at the same time, I imagine making the change is low priority compared to so many other improvements needed to be done to the Flash Player.

Not only that, but the settings manager does not have a concept of states. Instead it goes to a different HTML page which loads a different SWF file every time you navigate to a different tab. ZOMG how 1999!

Thank you everyone for your comments and suggestions. I’ve now found a feature request on Jira so please vote for it! http://sebleedelisle.com/2009/12/vote-for-a-locally-running-flash-player-settings-panel/

For me the settings panel always takes an age to load, and usually I get the 15 second timeout warning box appear.

I’ve voted for the entry on Jira. Nice one Seb, it’s long overdue.

Very annoying system especially when the machine does not have internet access. There should at least be an additional setup app that would allow you to change the settings locally. There is nothing more irritating than trying to fix a network card on a machine just to access a webpage to allow a flash piece to run locally.

To apply the setting of the local-trusted (sandbox) to a swf, you need to enable it using the Flash player settings panel. The question is what if I someone to save my site’s swf to access my data on the server side? Since it is local-trusted, crossdomain.xml doesn’t help to prevent such communication. Therefore, I don’t understand what benefit we gain by Flash player settings panel?

it’s one of the most ridiculous things about Flash Player! Horrible concept! Besides how many times did you have to explain the procedure of going through this to clients because their locally tested SWF gave them a security error?!

[…] venting of my frustrations about the FlashPlayer settings panel hosted on macromedia.com led to a mini campaign to get this sorted. The feature request rocketed into the top ten issues on […]

I found one workaround mentioned in passing elsewhere. The URL that I was using to access the storage settings panel was http://macromedia.com/… I changed that to http://www.macromedia.com/… and all of a sudden the flash player settings applet worked.

I’m probably an idiot for asking this but every time my webcam tries to launch on sites I get a Flash Setting dialog box that says “local” is trying to access…. etc.

I can’t select Allow or Remeber and when I click on Close and then Allow it still doesn’t work.

Does anyone have any ideas how I get around this nightmare??