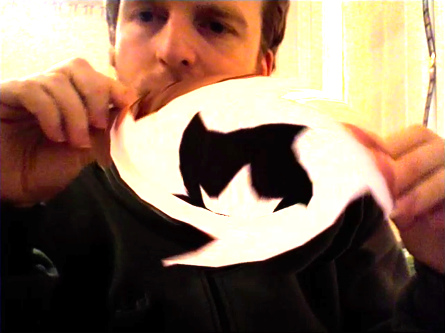 I must admit, I never really saw the point of augmented reality. It just seemed like a gimmick. But now I’ve been playing with it a little I’m hooked! And now I know it’s just a gimmick. But it’s such a pleasing gimmick I can’t seem to resist it!

You may have seen my presentation in December with my early experiments, it was nothing much but I made some snow and a little Christmas tree. Although to be honest I got the best round of applause for admitting that all I’d really done was compile the library 🙂

Since then I’ve been thinking about the possibilities even more, and I have to admit to being utterly blown away by the Japanese coder Saqoosha’s Happy New Year video, and it got me thinking about ways to take the image from the webcam and actually map that back onto 3D shapes, so it looks like we’re twisting and distorting reality!

It’s a very early demo, and it needs a lot more refinement. I’d like to add some more shading and particles, and have objects getting sucked in.

I’ll be covering augmented reality and working with the FLARToolkit in my upcoming Papervision3D training course. (Get in quick if you want the early bird discount!)

And here’s the presentation from before Christmas :

Festive £5 app: Seb and his magic particles from ribot on Vimeo.

26 replies on “Papervision3D wormhole in your webcam!”

Nice one, I have to admit I was quite amazed by the Happy new year video myself and yours is just as good. The point is not just making augmented reality but it’s more about the idea behind it and wormhole works well 😉

Dear Seb, do you think you could setup a wormhole from Brighton to Boston? I would love to hang out more often. Thanks Mate! 🙂

[…] my post from yesterday about augmented reality, what better than to link to experiments made by Seb Lee-Delisle with PV3D and […]

[…] Papervision3D wormhole in your webcam.Some more extension on augmented reality with the FLARToolkit. […]

Excelent work!
That wormhole is fantastic.
Personaly, I can’t even get my dea models in to Flartoolkit 🙁

And yeah, AR is a gimick when done on webcams+PCs.
The real practical stuff is mobile AR on phones and HUD’s. Stuff like Wikitude only scratchs the surface of whats possible.

Hey, the video on vimeo says “no longer available” — can you check and see if it should in fact still be available? I’m checking from overseas so perhaps vimeo is blocking Indian IPs?

@Scott, if only! Can’t wait to see you guys again in May 🙂

@Darkflame, thanks! I’m sorry you’re having trouble with FLARToolkit, have you looked at Saqoosha’s Papervision example code?

@Dave, hmmm seems weird. Anyway, I’ve uploaded it to youtube too : http://uk.youtube.com/watch?v=ZAa_MJyZLd4 – let me know if that works!

This is pretty cool. Any chance of posting the source code?

I can’t wait to see more.

Quick question: How are you setting the threshold automatically?

So do you change the 120 value to something else dynamically, until it finds the pattern?

Just wanted to see what you went with 🙂

Gotta be the coolest thing I’ve seen with flAR so far. It is a gimmick, but so cool! I have to take some time to fiddle with it, maybe make something fun.

Seb
Great job! Can you embed it in a webpage like http://ge.ecomagination.com/smartgrid/ar/turbine.html?c_id=direct so we could print the token and I can show my IT classes?
Cheers

Hi David, glad you like it! I’m really busy right now so don’t have time to dig out the necessary files but they’re all here in my google code repo http://code.google.com/p/sebleedelisle/source/browse/trunk/simplar/ – good luck!

Great project. Was just wondering if there was a video in your tutorial on Lynda.com documenting the process and code you applied to achieved the wormhole result?

I’m a non-coder looking to achieve something like this, and have yet to be successful!

Thanks Desiree, I honestly can’t remember – I think I talk about it in the Lynda course, but I certainly wouldn’t go into too much detail. It’s certainly quite complicated!