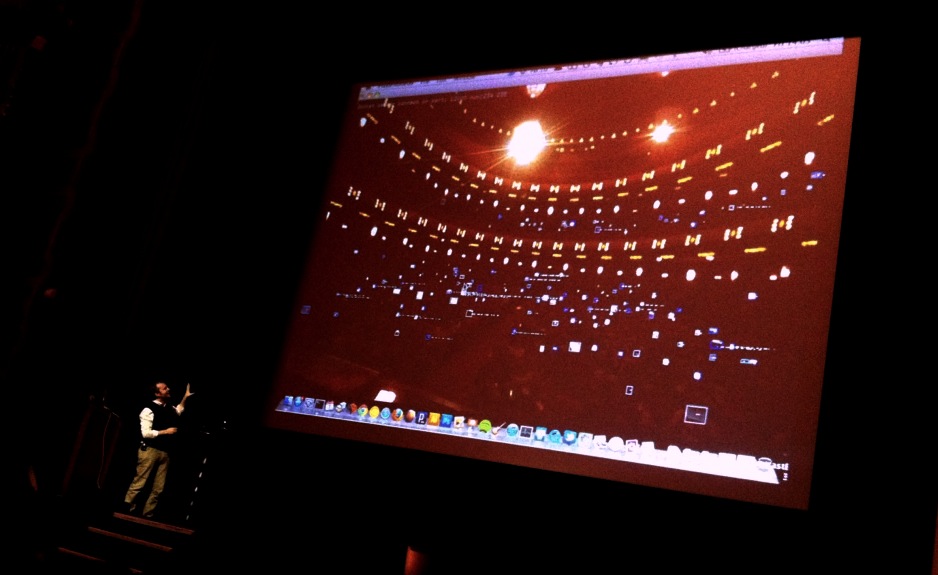 PixelPhones is an open-source platform that can turn smart phones into individual pixels of a massive audience-sized display.

It runs over wifi on a local network (but also over 3G / 4G in theory) and runs in a browser so no app is necessary. It communicates with the server using the HTML5 real-time networking protocol WebSockets. As each phone connects, they synchronise their clocks with the server – this ensures that all the phones remain perfectly in sync down to the millisecond.

Keeping the phones in sync is one thing, but by far the biggest challenge is how to locate the phones. Each phone gets a unique ID number from the server and, when signalled, they start broadcasting their ID by flashing their screens in a coded sequence. The PixelPhones computer has a camera pointing at the audience, it finds the flashing phones and decodes the IDs.

Once the system know each phone’s position it can change the colours to create images and animations across the entire audience.

This system has been in development since April 2011 by creative coder Seb Lee-Delisle, using the open-souce C++ library openFrameworks. He has now partnered with Hellicar and Lewis to scale it up from hundreds to thousands of phones.

[…] of Seb’s first independent projects was called Pixel Phones, an audacious attempt to turn a roomful of smartphones into a giant […]

[…] of Seb’s first independent projects was called Pixel Phones, an audacious attempt to turn a roomful of smartphones into a giant […]

[…] the audience’s minds with his amazing body of digital art work. Seb is the brain child behind PixelPhones, Lunar Trails and PixelPyros and used his time to wow the crowd with creative insights behind the […]