I can’t believe it’s already been two weeks since my first Margate visit and since then there’s been a burst of technical R&D. I’ve decided to recreate the magic of an old fashioned side show, with additional computers and lasers.

I was initially inspired by the Das Blinken Blonken project on Instructables. It’s a hand made electronic ball throwing game where the target has sensors, lights and a scoring system. How fun to throw real things at digital things? 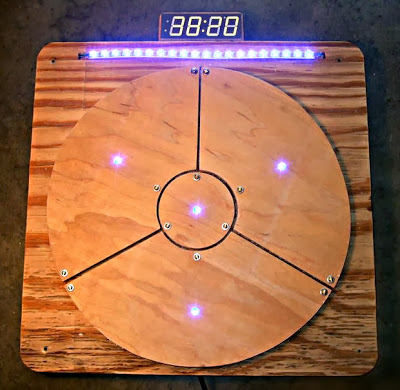 It got me thinking about coconut shies and the knock-down-cans game (known as chamboule-tout in France and Dosenwerfen in Germany). It’d be pretty fun to make a coconut shy where you have real balls, but the coconuts are projected with a laser. But then I heard that there was a history of shooting galleries in Margate, and that led me on the path of creating my own digital shooting game, with physical bullets and laser projected moving targets. 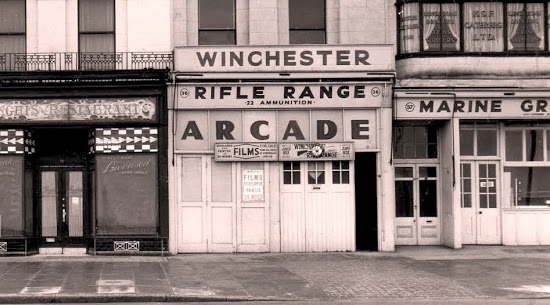 My first decision – what type of gun? I have strong memories of excitedly getting my hands on a heavy air rifle at a sideshow as a kid, so my immediate thought was a BB gun. I immediately went and bought an Airsoft gun – it fires 6mm BBs and are supposedly safe to fire at humans, but are just scary enough to be exciting. As a confirmed pacifist it seems strange to be excited about guns, and even stranger to remember how much I loved playing with cap guns growing up.

OK, so I’ve got the idea, but how do I build it? The main problem that I have is trying to detect where a bullet has hit the wall. My friend Jason Hotchkiss has built a ping-pong table that plays music notes depending on where the ball hits. And his system uses microphones attached to the table, that detect the sound the ball makes. It then calculates the tiny time differences the sound takes to reach each microphone, and triangulates the sound back to the source.

Although it’s not triangulation – it’s multilateration because you don’t know the actual time the sound took to reach the sensors, but only the difference between the times that the sound reaches each microphone. It’s an incredibly complex maths problem – I dare you to have a look at the formula on the wikipedia page. Jason had already solved this problem (with what I know now to be an incredibly clever and fast estimation system), but I arrogantly thought that I could improve on his solution. And promptly headed down into the worst maths rabbit hole you can imagine.

You’ll be pleased to hear that I’ve pretty much come out of it now – (I’ll be sharing the technical details in detail on my own blog once I finish the project). Here’s a short and very early test of the system.

In my next post I’ll be talking about the other solution I’ve been working on that uses an infra-red laser light plane.

This post first published on the Margate Games blog February 2014