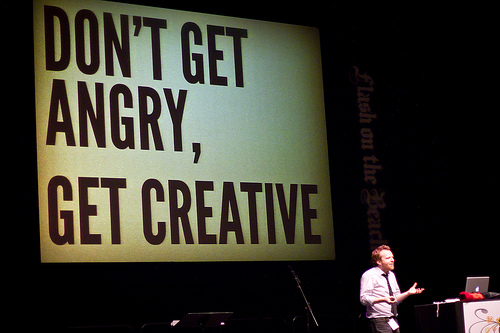 Can you believe it was nearly a year ago that I first presented “What the Flux!?” about the future of Flash? My message was mostly optimistic: there was still demand for Flash work, but you shouldn’t be afraid of change. But now I’m seeing anecdotal and statistical evidence that more change is ahead: Flash content, at least on the web, is diminishing. But is it really time to say goodbye to the plug-in, or is there life in the old dog yet?

In a straw poll at a recent meeting of FlashCodersNY, the vast majority of attendees had moved away from Flash as the work had dried up. My friend Josh Hirsch at Big Spaceship told me (in an interview for the Creative Coding Podcast) that they virtually never use Flash any more.

And last week Geoff Stearns declared the death of Flash due to falling usage of his SWFObject JavaScript library, commonly used for embedding Flash objects. 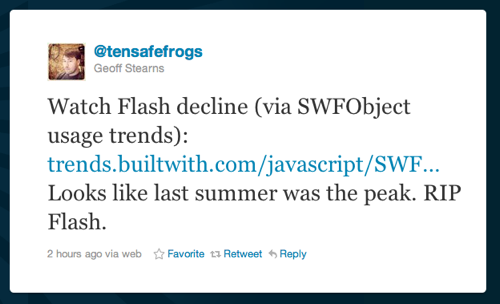 Whether you believe these observations and stats are representative or not, it’s pretty clear that Flash content isn’t all over the web in the same way that it once was. There are a few reasons for that.

Google are doing everything they can to avoid Flash and promote capabilities of Chrome, even when their doodles particularly suit Flash’s capabilities they go out of their way to engineer an alternative solution.

Google have released the WebM codec and as they control most of the video on the internet I don’t think it’s too much of a stretch to imagine they’ll be pushing non-Flash video alternatives. It’ll be hard to get HTML5 video to work but they have the resources and the will to do it. Whether it takes one year or 5 years, they’ll do it.

Of course HTML5 video will struggle with DRM, video content will still require Flash so you’ll probably install it as you encounter those sites, the same way I just installed Silverlight for Netflix. If you only need Flash when you visit a site like this, won’t its penetration rates drop?

It will continue to get worse as take up of WebGL, canvas and HTML video increases. The Flash players simply hasn’t innovated fast enough. Most of the Papervision team moved to Unity3D as successive revisions of FP still had no GPU support.

But Flash will continue to have its niche. In theory, Flash Stage3D will have a wider reach than WebGL and best case scenario – will become the de facto standard for web based 3D and games. But Adobe have no public plans to make tools to create 3D content. Unity3D will be by far the best tool to create Flash 3D content. And that helps the FlashPlayer but how does it make money for Adobe? And what about when Unity3D make a WebGL exporter? (no public plans but suggested in arap’s presentation and they’d be idiotic if they weren’t looking into it).

And even in that best case scenario, the only thing Flash Stage3D has over WebGL will be that MS doesn’t implement WebGL – If some shit-hot WebGL comes out with a message to install chrome then people will do that and IE stats will fall further. You can be sure then that MSIE will implement WebGL.

This is the realisation I had: Adobe struggle to justify investing in the FlashPlayer, and even resort to dark patterns to make money out of it. When the best tools to create cutting edge Flash content are no longer made by Adobe, what motivation will they have to continue investing in it?

I rarely make predictions unless I feel confident, but I ready to put my neck out on this. Flash content on the web will become niche, and although its niche will be pretty cool, it won’t be profitable enough for Adobe to continue investing in it.