I love the Line3D in papervision, but wouldn’t it be great if it actually got larger as it came towards you? Currently the lines are just drawn using the Flash drawing API, and the line’s thickness is the same no matter how far away it is.

I’ve been working on a new line drawing algorithm. I wanted the lines to look more like tubes, cylinders in fact. But I obviously don’t want the overhead of drawing actual cylinders! I just want a 3D line that gets bigger as it comes towards you but with a big roundy end like it’s got a spherical end.

So I started drawing pictures on paper and came up with this : 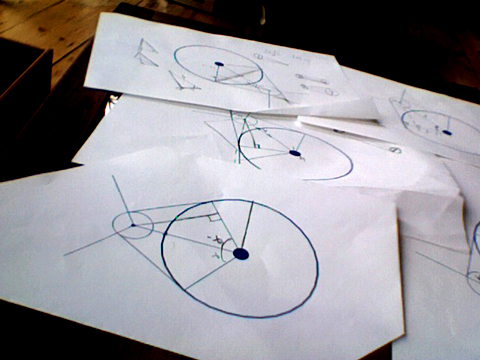 I knew I had to draw two circles (one for each end of the line) but I didn’t know which points on the circles to draw the line between. Well I won’t bore you with my working out, but in the end I opted for a trig solution, even though I’m fairly sure there’s a really nice vector solution. (Please comment if you’re a vector maths genius 🙂

Here’s the final working swf, you can move the points around and adjust the radii and always get a nice drawn line with no noticable join at each circle.

So now I’ve just got to implement these new lines into PV3D… I’m hoping to do it later today.

That’s really elegant and cool! I would love to have true lines in PV3D too, especially to use on my portfolio front page ( http://www.deafmetal.com/portfolio/ ). I can’t wait to see it implemented. Great work!

Sweet! I can’t wait to start playing with it!

Hope you followed all that!

Hey guys, glad you like it so far – integrating it into PV3D is gonna be a bit tricky though… but I’m on it.. .

Andy! Nice work, your vector maths is clearly a lot better than mine… I pretty much understood your explanation though.

Maybe I’ll post a code snippet later, the only possible problem with my algorithm is that I need to get the distance between the 2 points, and as we all know, the Math.sqrt method is heavy on the CPU.

I don’t mind trig solutions though, as long as there aren’t any sqrts involved! So how would you calculate the angle of r0?

Nice work Seb!
Can’t wait to see what else you’ve been up to when you come to Minneapolis this year for Flashbelt!

hey keith! All that work and you just notice your sliders huh? 🙂

But yes should have credited you, sorry! Thank you for your nice easy components… love em!

@nik, yeah I’ve got a couple of sessions planned for FlashBelt, wait and see 🙂

Very inspirational Seb! Can’t wait as I see this
line effect all the time on commercials on television and it will be cool to have it in Papervision.

Hey Seb, as always your examples are inspirational.

Basically it would allow one to draw abstract line effects similar to those shown on this site.

Let me know if you are interested and I can forward it on. It might make a nice tut.

@Irishman – I’m not sure exactly what you mean but sounds interesting… fire me a mail and I’ll let you know!

[…] perspective correct line by ourselves. I have found a brilliant piece of code just for the task at Seb Lee-Delisle’s blog. This is fantastic piece of geometry […]