Bit of a last minute one this! But here are the source files for my AS3 particles session at FlashForward. As ever, please bring your laptops - this is an interactive session! Check out the submissions from last year's session. [no longer available, sorry]

One of the most fun parts of this particle session is that the whole audience gets involved screwing around with the code to make your own amazing creations!

Download the source files here and email your contributions to me. We'll be reviewing your work at the end of the session.

So looking forward to seeing you tomorrow 🙂

I’m just in Manhattan at the moment for a couple of business meetings, before I take the train tomorrow for FlashForward Boston.

It’s all a bit of a mad rush but it’s looking like it’s going to be a superb conference, the speaker line-up is impressive, and I’m finding it hard to make decisions on who to see!

My session is on Friday morning, and it’s an update of the Particle effects session, this time all in AS3. More demos and code to come..!

We’re also finalists in 2 categories at the FlashForward Film Festival, and I’ve just found out that we’re in the shortlist for the Y Design Awards, so fingers crossed!

Hopefully see you in Boston…

Here’s the recap from part 1:

So what’s going to happen? Have I been drinking too much of the green tinted Koolaid? Read on my friend, and all will be revealed.

END_OF_DOCUMENT_TOKEN_TO_BE_REPLACED

Oh look, I just noticed that the new Flash player penetration rates for June 07 have been posted! Nice! 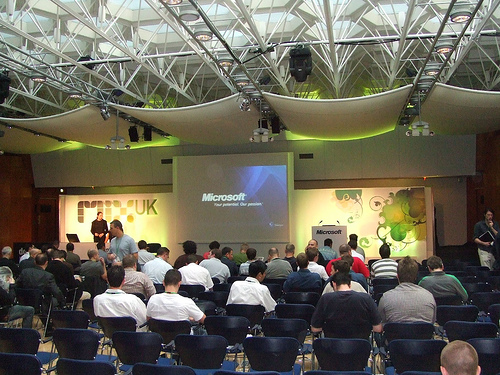 I’ve just arrived home from a rather busy couple of days in London. I was the guest of Microsoft at their Mix07 conference. And by guest, I mean that they called me up the day before to find out if I could give a one hour long presentation about my work. But I like that kind of thing so I said yes.

The conference seemed primarily to be focussing on the Expression Suite of software, including Silverlight. It’s a little scary for a Flasher to be surrounded by so many .net developers, and I’m not ashamed to say that I felt a little out of my comfort zone as I sat through the keynote speech.

Then I realised that I have to be careful. It’s only natural for people to give greater import to subjects that they are experts in, and that’s why the fan-boy phenomenon appears.

But I’m not going to be a Flash fan-boy! I’m just going to watch, listen, and ask some questions. Some hard questions. And once I had let go of my extensive Flash knowledge, and that defensive knee-jerk reaction against anything new, a feeling of freedom washed over me.

And I thought, maybe, just maybe I’m getting a glimpse here of the future. A future where Flash is no longer the only option for online rich application development. And a future bathed in green light. A lot of green light.

When I first entered the room, all I initially saw was around 500 rather geeky looking .net developers. But now, with my new green-tinted spectacles, I felt a profound sense of love for these unsung heroes. These under-rated mavericks of the programming world, whose talents have so far been wasted on grey forms, data applications and tax return software.

And with my new sense of inclusivity, I decide to sit back and actually listen for once. So tell me, my new Microsoft friends…

…what is this Silverlight thingy all about?